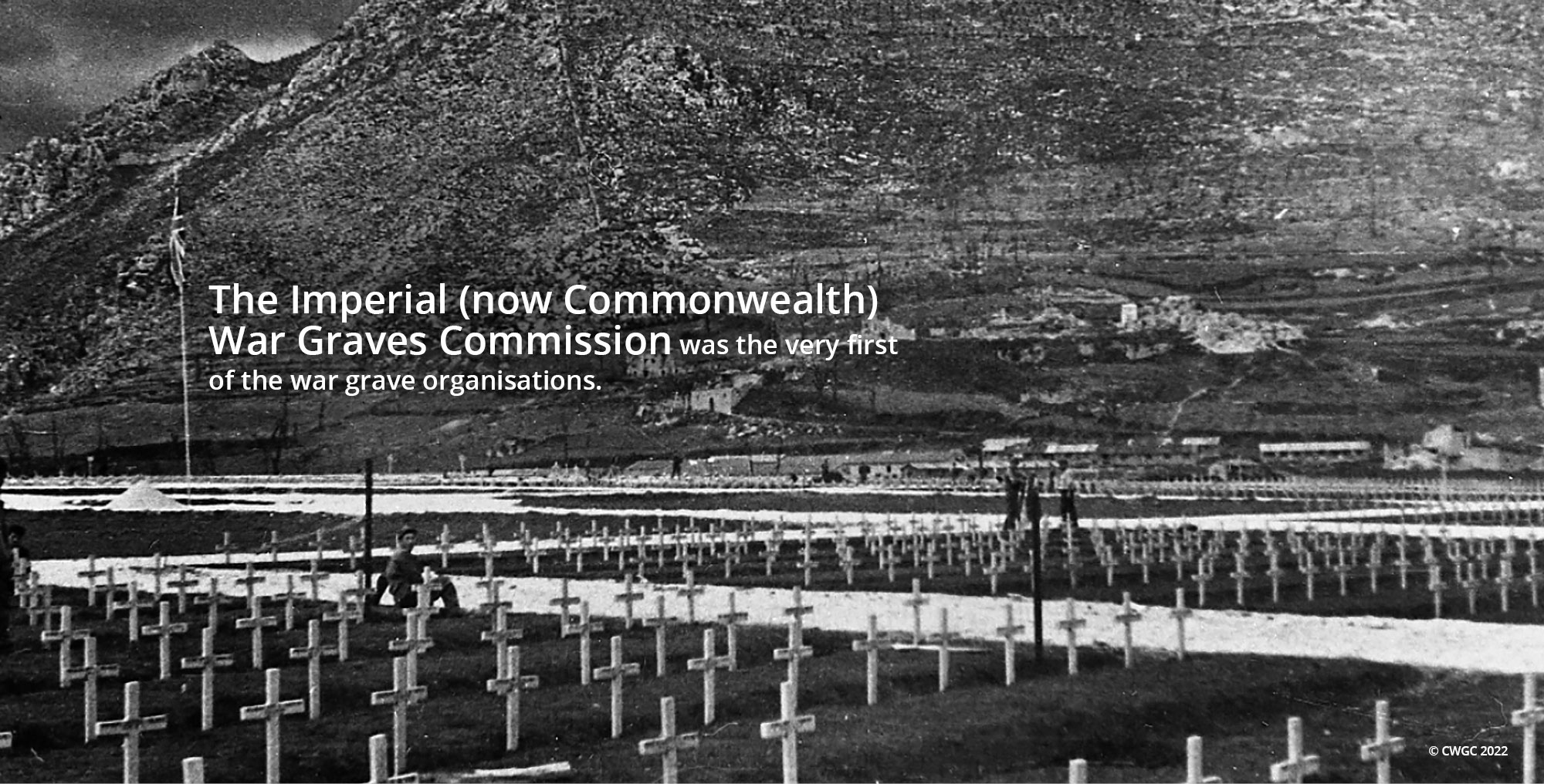 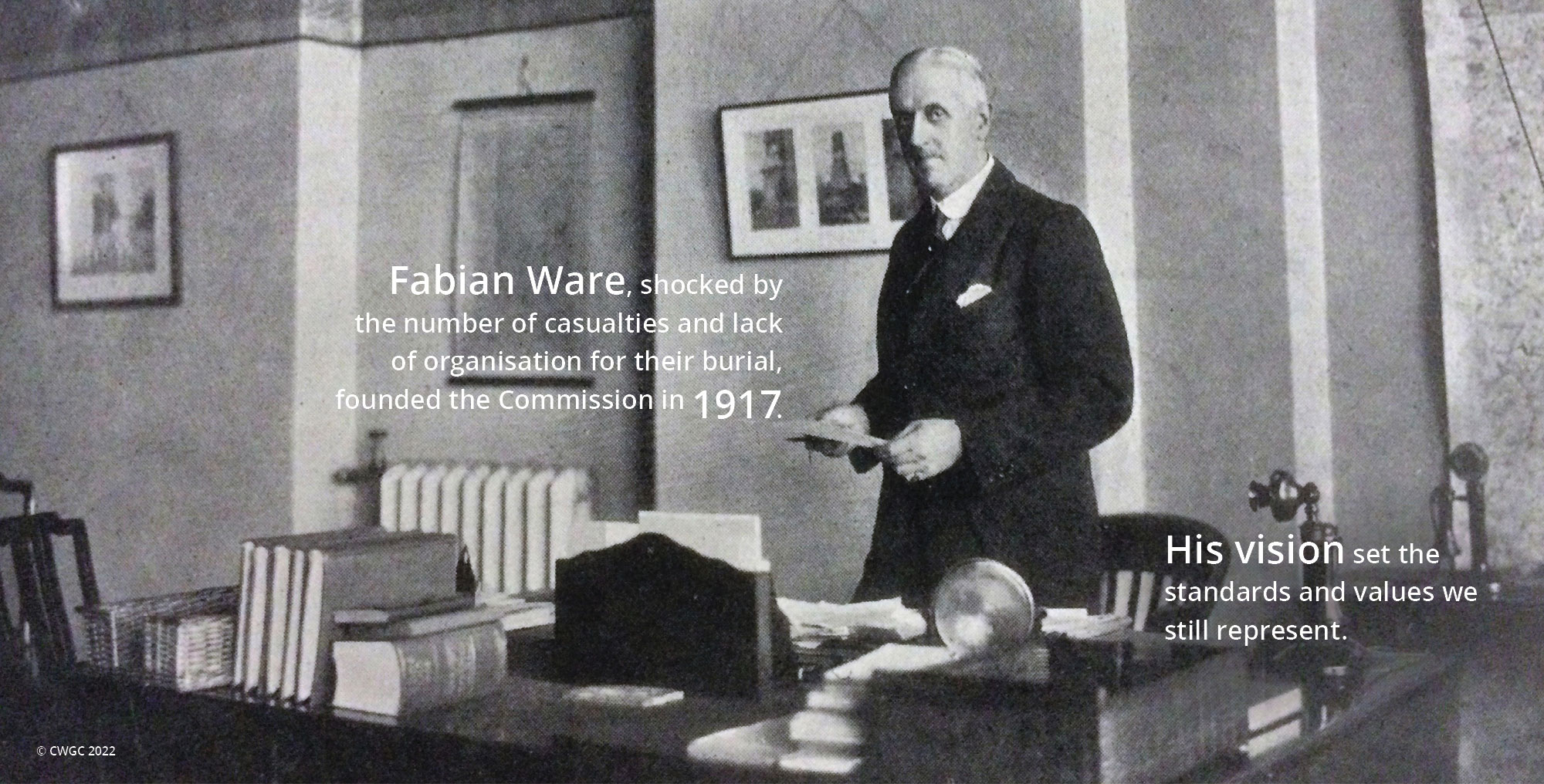 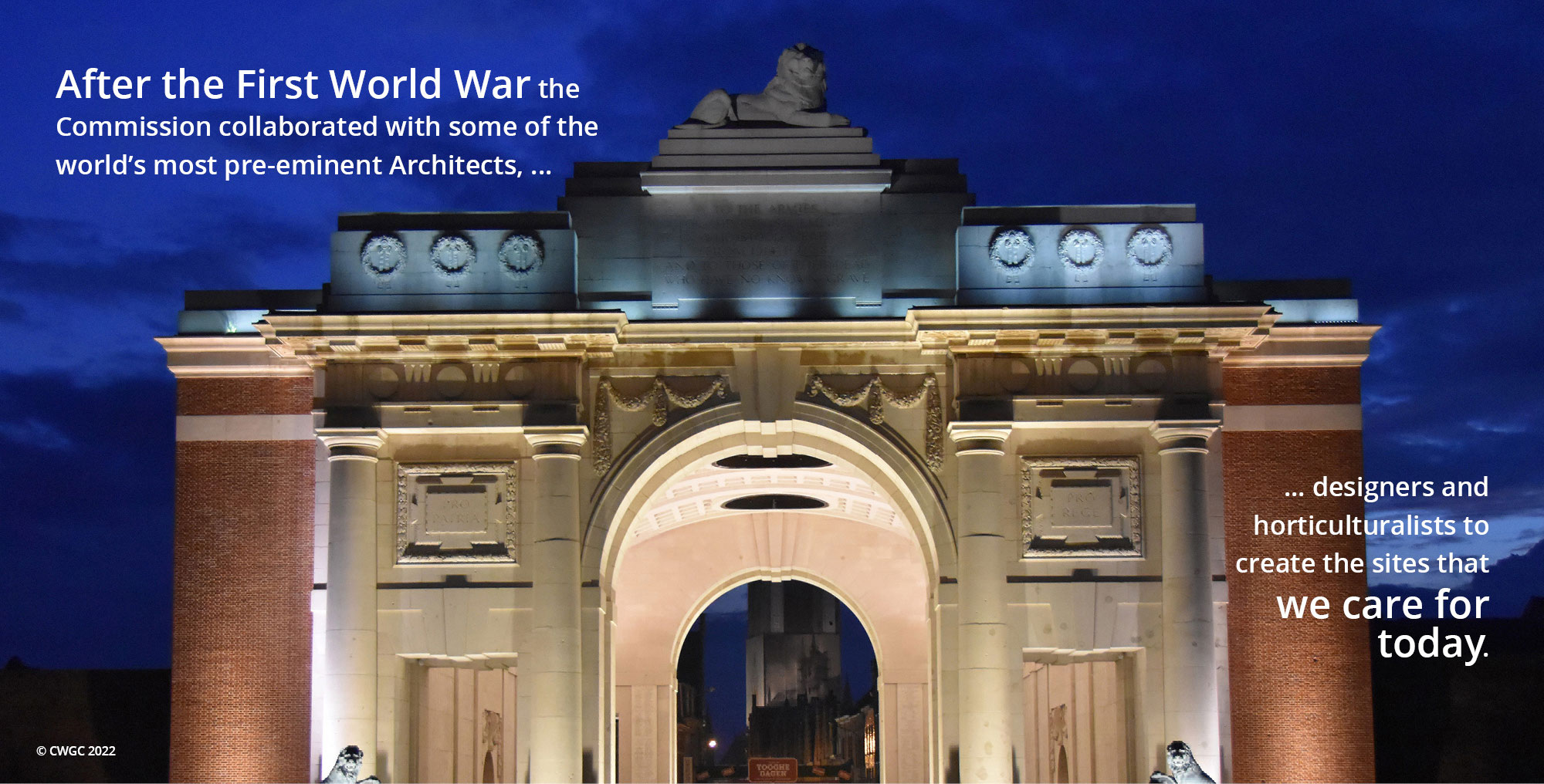 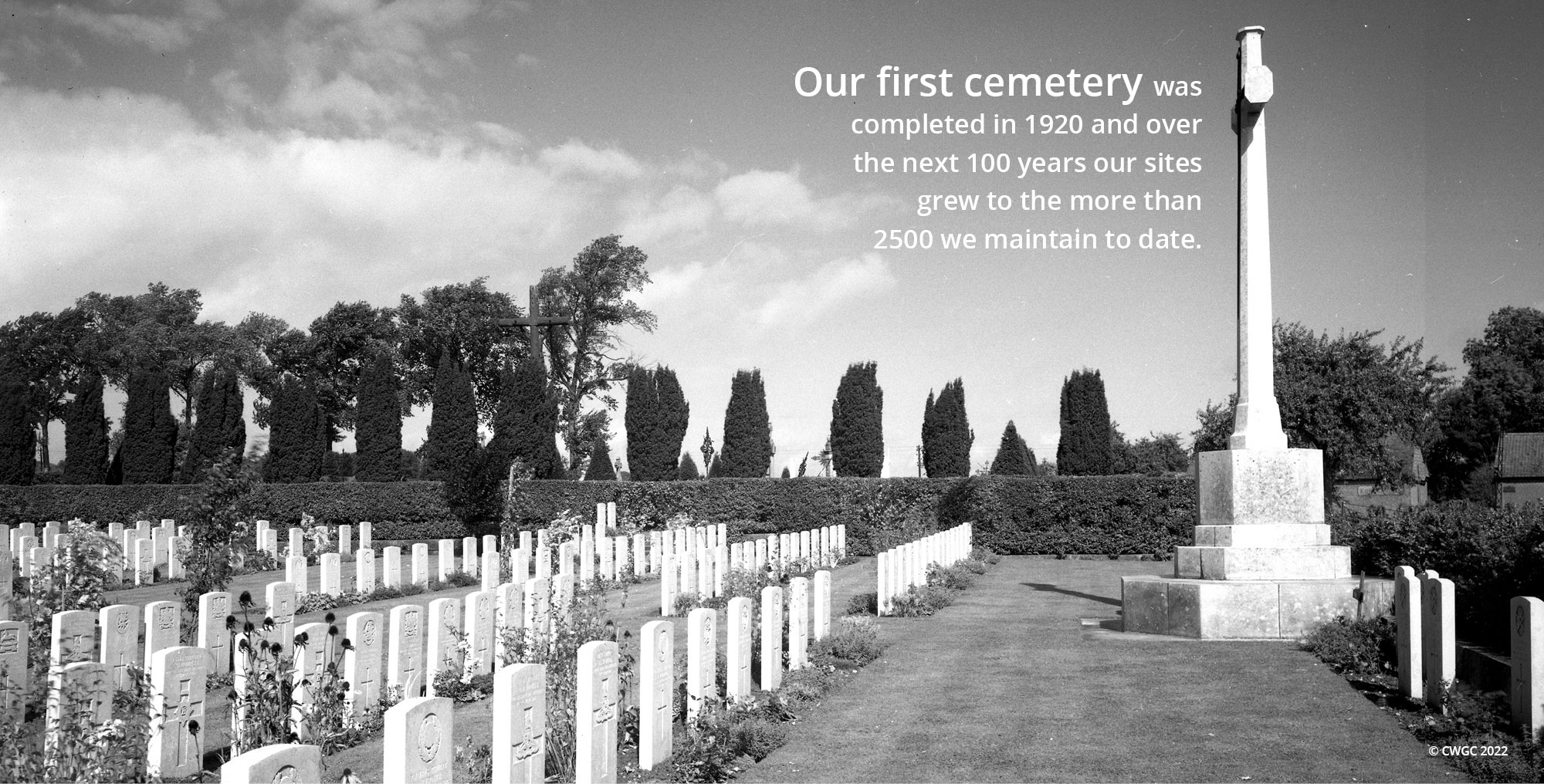 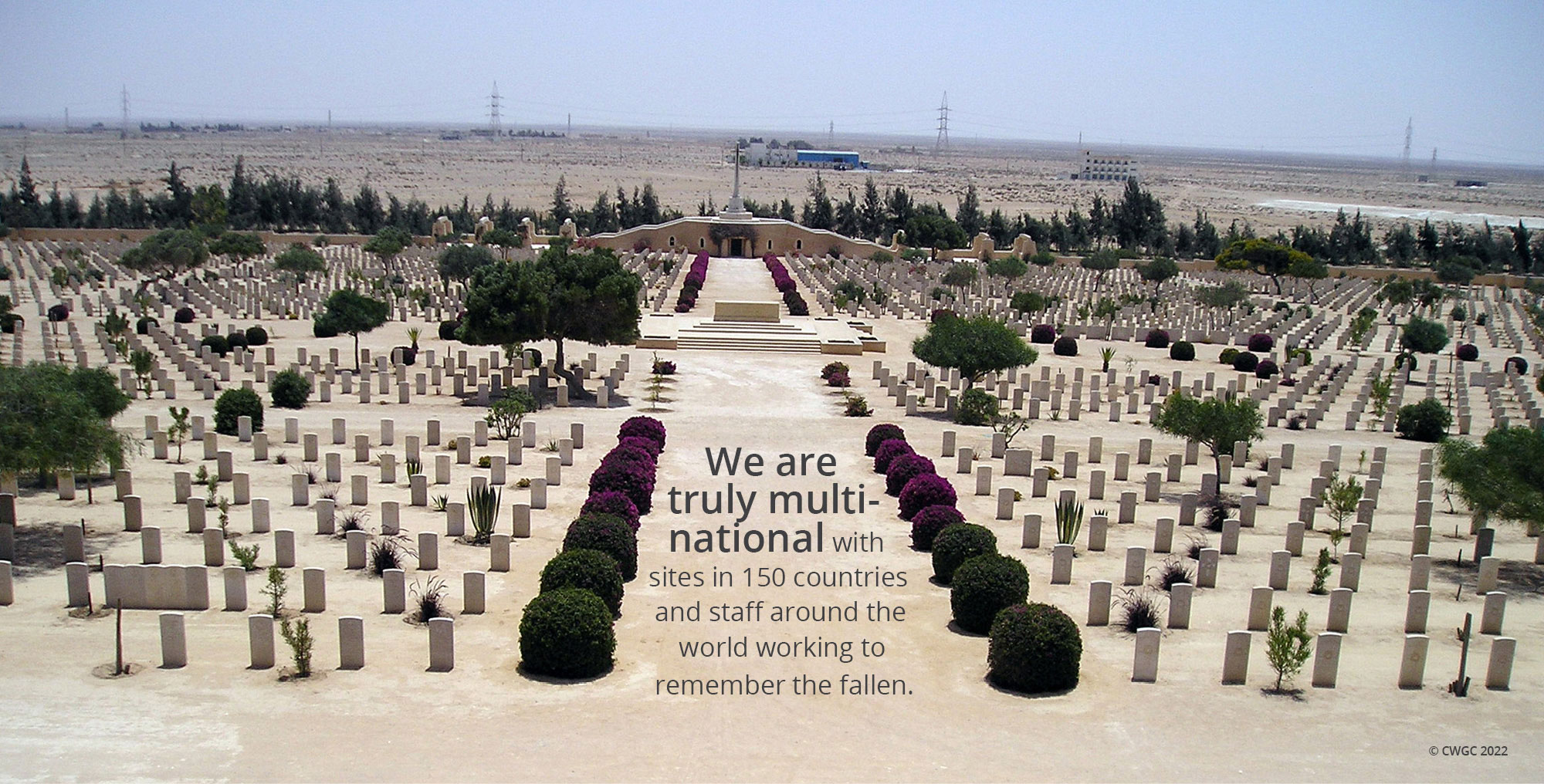 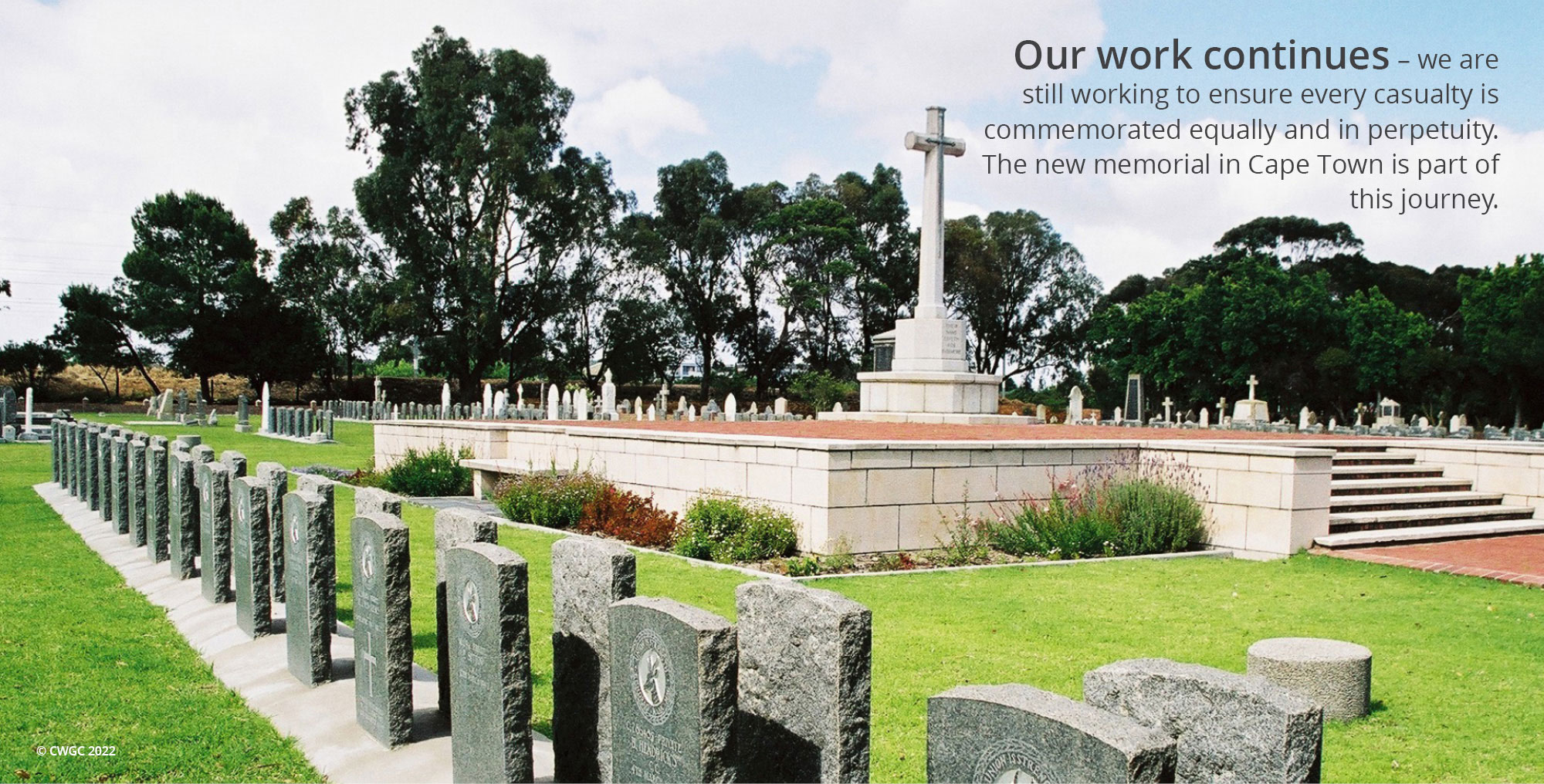 We honour and care for the men and women of the Commonwealth forces who died in the First and Second World Wars, ensuring they will never be forgotten. Funded by six Member Governments, our work began with building, and now maintaining, cemeteries at 23,000 locations all over the world.

Today, over a century after we first began, our work continues through our staff, supporters and volunteers who preserve our unique cultural, horticultural and architectural heritage and ensure that the stories of those who died are told.

Since our establishment, we have constructed 2,500 war cemeteries and plots, and we have erected headstones over more than a million burials at military and civil sites across the world. For individuals who have no known grave, we have built memorials to the missing as places of commemoration. Despite this enormous global effort, largely completed in the aftermath of the two world wars, this work continues today as we alter or construct new sites where we find our job is not yet complete.

Central to this project will be a national community engagement project, which will raise awareness of these labour units and the sacrifices they made, tracing families of the men and targeting young people in schools and communities with their stories. 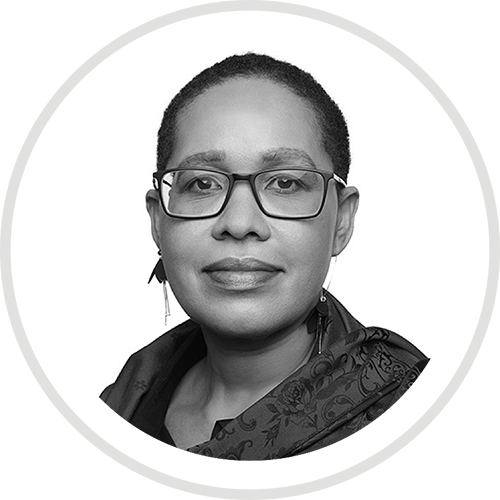 Ms. Althea Peacock
LEMONpebble Architects:
Founding partner and director
Ms. Peacock is a founding partner and director of her Johannesburg based practice LEMONpebble Architects. She is a graduate of the University of the Witwatersrand and is a professional architect practicing in Johannesburg.
Ms. Peacock is emersed in thinking through being a black women architect and its implications to discourses on identity, marginalized/erased histories and narrative, feminist practice and spatial politics, and how these manifest/are explored in their projects. Current projects in her office include renovations of the School of Architecture at the University of the Witwatersrand and a Traditional Medicine Facility in the Limpopo Province.
Ms. Peacock has experience as guest critic at various universities for over a decade. Mr. Cedric Daniels
City of Cape Town: Manager: Urban Design,
Urban Planning and Design Department.
Mr. Daniels has 17 years of public sector and 25 years of private sector experience. He holds a Master of City Planning and Urban Design degree and a Bachelor of Architecture degree, both obtained from the University of Cape Town, South Africa.
Previously Mr Daniels served as a panellist on the Cape Town Municipal Planning Tribunal; an adjudicator in the Architectural Competition for the Sol Plaatje University in Kimberley and the Mpumalanga University in Mbombela (Nelspruit); a municipal representative on the Steering Committee of the Urban Design Institute of South Africa (UDISA); and as a panellist on the South African Heritage Resource Agency - BELCOM Permit Committee. Mr. David Mcdonald
CWGC’s Non-Commemoration
Programme: Operational Lead
Originally from Northern Ireland, Mr McDonald is a qualified Building Surveyor, Archaeologist and Project Manager based in London, UK. Having been involved in heritage conservation and restoration projects across the continent of Africa for the last 7 years, Mr. McDonald is now the Operational Lead for the delivery CWGC’s Non-Commemoration Programme which seeks to work with local communities to commemorate previously un-recognised casualties of the First World War (1914-18).
He is a passionate advocate for sustainable development in the heritage context, the preservation of intangible cultural heritage and community-led heritage solutions in the realisation of this work. Ms. Mariam Issoufou Kamara
Founding Partner, atelier masōmī, Niamey,
Niger, with a design studio in New York.
Ms. Kamara is an Architect from Niger and a graduate of the  University of Washington.
She believes that architects have an important role to play in creating spaces that elevate, give dignity, and provide people with a better  quality of life.
Completed projects include the Hikma Community Complex, a Library and Mosque complex, which won two Global LafargeHolcim Awards. Upcoming projects include the Ellen Johnson Sirleaf Presidential Center for Women and Development in Liberia and many others.
Ms. Kamara has been an Adjunct Associate Professor of Urban Studies at Brown University and the 2021 Aga Khan Critic at Harvard Graduate School of Design. Ms. Kamara is a 2019 Lauréate of the Prince Claus Award and the New York Times named her as one of 15 Creative Women of Our Time.
Photo: ©Rolex/Stephane Rodrigez Delavega 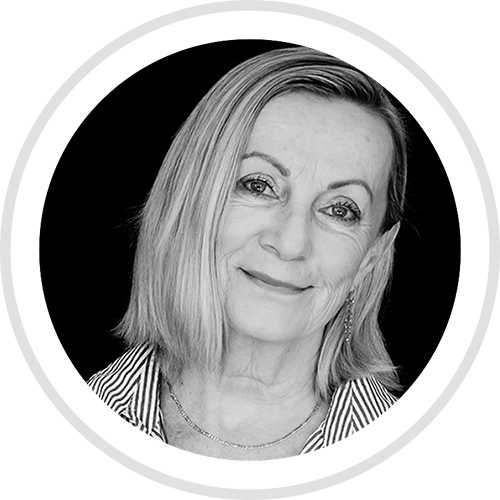 Ms. Laura Robinson
Architect and Local Community
Representative.
Ms Robinson is an architect specialising in heritage conservation, management and policy development as well as in World Heritage. She is a Past-President of the Cape Institute for Architecture (of which she is an honorary lifetime member) and has convened both the local and national Heritage Committees.
Her professional engagements include the heritage of the 20th century, cultural landscapes and sites of memory and conscience, intangible heritage and the incorporation of a rights based approach into heritage.
A founder member of ICOMOS SA, as well as a previous Board member of ICOMOS International, Ms Robinson has been active in World Heritage both in South Africa and internationally. 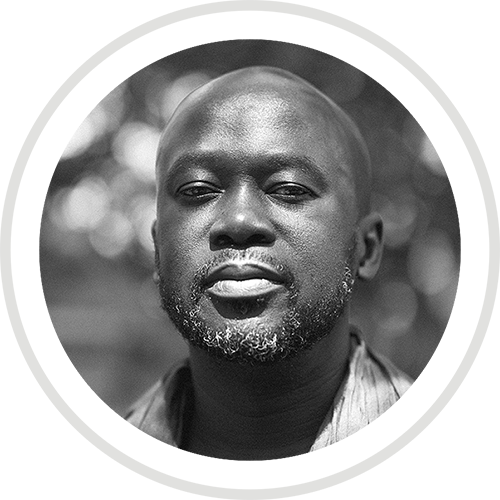 Sir David Adjaye
Founding Partner, Adjaye Associates with
studios in Accra, London and New York.
Sir David Adjaye OBE, is a Ghanaian-British architect who has received international acclaim.
Adjaye’s largest project to date, the Smithsonian National Museum of African American History & Culture, opened on the National Mall in Washington DC in 2016.
In 2017, Adjaye was knighted by Queen Elizabeth II and was included in TIME’S 100 Most Influential People List. He was winner of the 2021 RIBA Royal Gold Medal. The Royal Gold Medal is considered one of the highest honours in British architecture for significant contribution to the field internationally.
Adjaye is also the recipient of the World Economic Forum’s 27th Annual Crystal Award, and was recently honoured as an inaugural recipient of the  TIME100 Impact Awards.
Photo: @Chris Schwagga